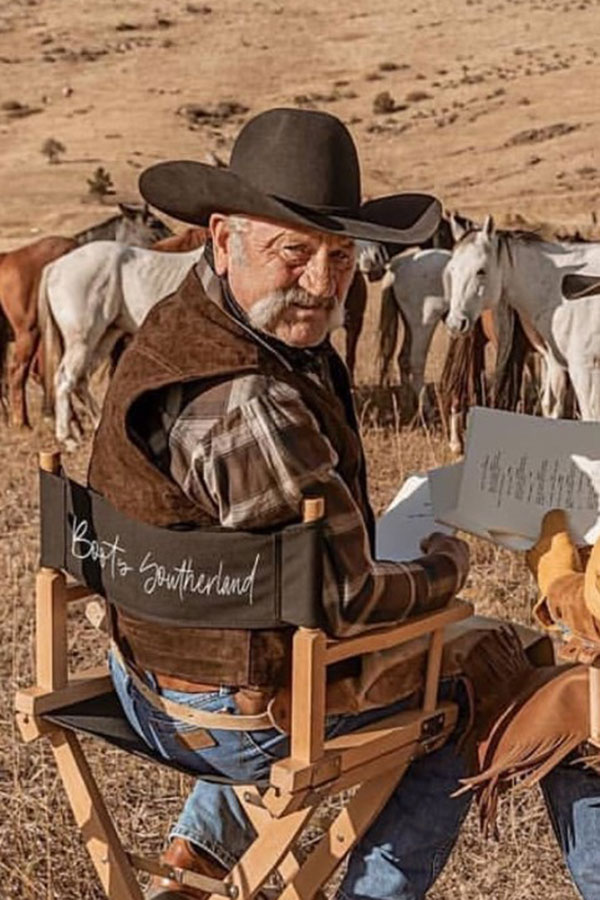 Boots Southerland was raised on a ranch in Manzanola Colorado. He moved to New Mexico in 1970 after serving in the Navy as a Flight Deck Aircraft Director on the USS Handcock from 1964-1967 in Vietnam. He came to NM to train horses in stunt falling, rearing up and driving stagecoaches. This led him to working in the NM Film Industry where, early on, he became a Horse Wrangler, Stunt Performer and an Actor. The first feature he worked on was the 1984 feature “Silverado” where he  was a horse riding extra. His first speaking role was in the 1988 Television Miniseries “Lonesome Dove” starring Robert Duvall. He went on to work as an actor on such memorable films as “Young Guns II”, “Wyatt Earp”, “No Country for Old Men”, “Terminator Salvation”, “Sicario”, and “Hostiles”.

Boots has been in the Screen Actors Guild since 1988, and In 1995 he joined the Hollywood Teamsters Union as a Transportation Driver and Animal Wrangler. Through all his other Film Industry positions, he has always continued to be a SAG actor with over 80 roles in Film Television and Commercials. He has also been in several Music Videos and Print Advertising. His upcoming roles include a 4 Episode arc in Season 3 of “Yellowstone” and the soon to be released Feature Film “Those Who Wish Me Dead” directed by Taylor Sheridan and starring Angelina Jolie. With 34 years in the Film Industry, Boots still loves his work as an Actor, Transportation Driver and Wrangler and is still working in all those positions.